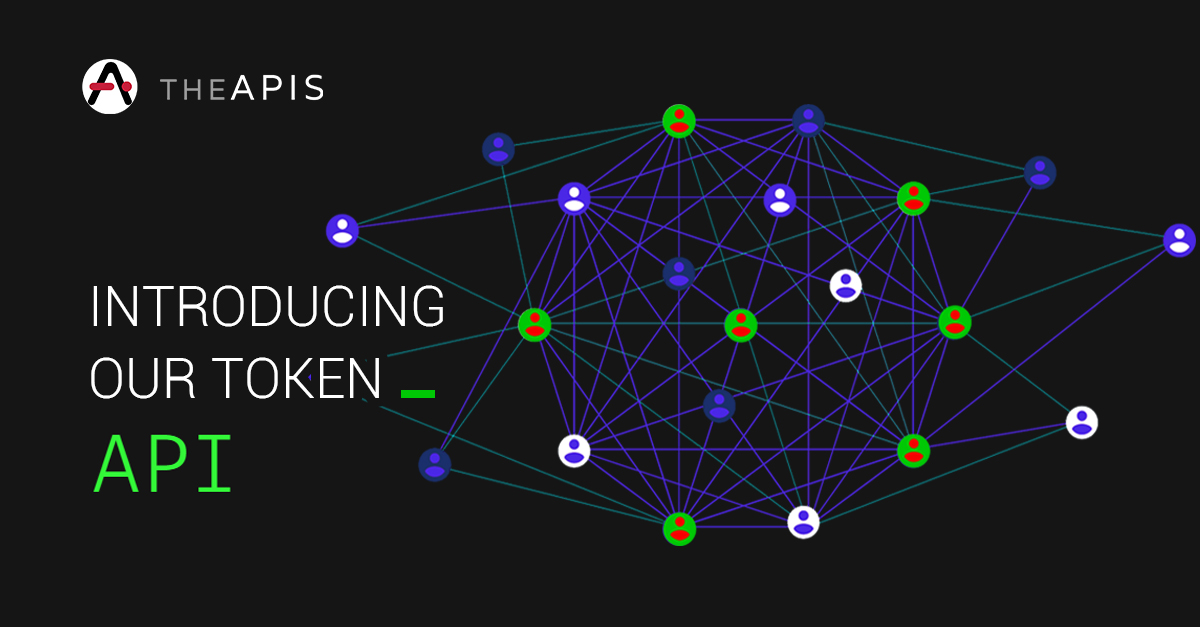 Dec 10th, 2020
‍
‍
We are proud to announce that API, the APIS Protocol token, is now live!  This article will cover the allocation details, token utility, and various token metrics.

Since its inception, The APIS Protocol (”API”) has served developers and their users through trustless and decentralized infrastructure. The growth of the APIS infrastructure, as well as that of the token, is heavily reliant on the community. As such, the majority of API token supply will be owned by the community.
‍
A breakdown of the native token is as follows:

· 19% to Community Treasury with 1- year vesting 19,000,000 API
‍
· 17% to DApp Partners with 2 - year vesting 17,000,000 API
‍
Initially, API can be obtained through usage mining or unique collaborations and grants given to promising developers who wish to contribute to APIS. API token holders may vote for continued inflation after completion of the transaction mining program if it is considered appropriate for the continued health of the API ecosystem. 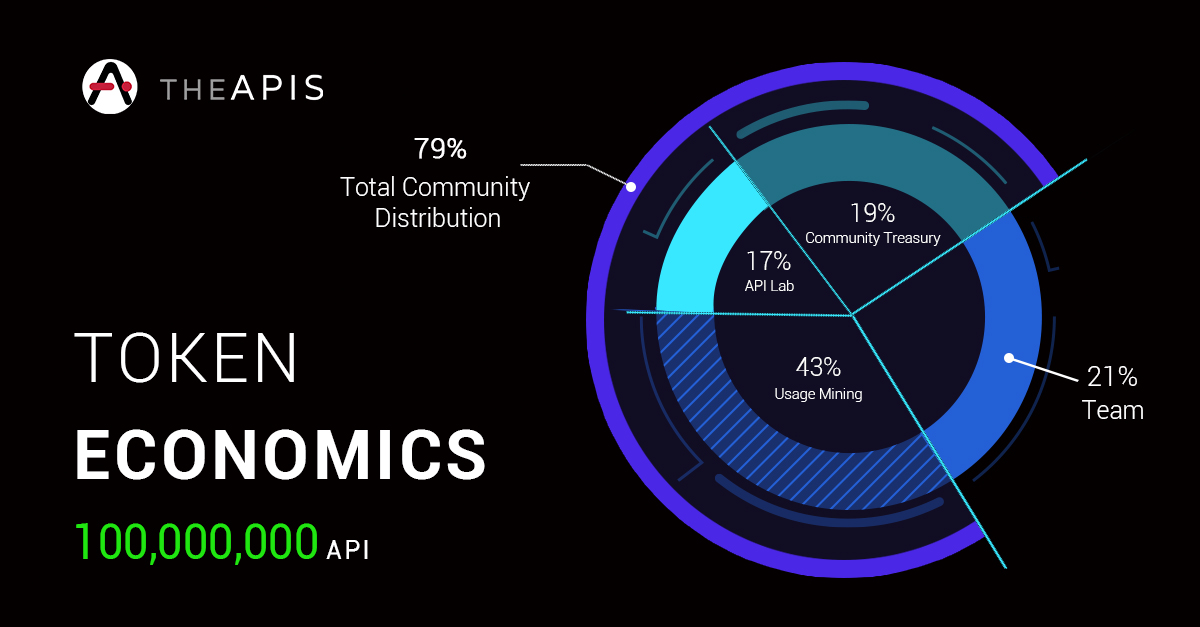 We at The APIS understand that protocol development is about both art and science through our involvement with numerous layer-one and layer-two blockchain projects. This is our best attempt at a fair, sustainable token distribution, although it may be subject to change in the future through community voting.
‍
Usage Mining (43%)
‍
21.5% (21,500,000) will be distributed to both Demand-side Transacting Miners (Dapp developers) and Supply-side Transacting Miners (APIS Node and Gateway operators). Both supply and demand sides will be rewarded by the same formula, to ensure maximal fairness of distribution. API earned in the usage mining program will be distributed weekly but will hold a one-year lock up.The community will reserve the right to update this vesting period should they choose.

This allocation will be reserved for the usage of the community, thus allowing the community to leverage existing token allocations (without future inflation) to fund the project. The APIS Team will likely initially sell some of these tokens to strategic investors across the global internet community, to both traditional web businesses and crypto-native investors and builders . In order to ensure a fully fair launch of the project, APIS has attempted to run the project without any outside funding, as that would be ideal, but is simply not feasible. Of note, the funding we receive will go entirely towards the salaries of builders and select but crucial business development employees.These tokens will be subject to a one-year lock-up followed by a monthly vesting schedule when listing occurred.

Specific applications have the potential to exponentiate our growth, namely prominent crypto exchanges, DeFi developers, and traditional Web 2.0 developers and applications with whom we have significant partnership connections. We are reserving this in full transparency, instead of merging it with the Community Treasury reserve, as we believe transparency is crucial to building open-source infrastructure. If this section is not distributed, we will vote to merge it into the Community Treasury.

The team’s tokens will be the last to vest. They will be fully locked-up for one years, after which there will be monthly vesting over an additional two years, a total of two-year vesting. The purpose of this schedule is to fully align the APIS team with the community owners’ incentives. 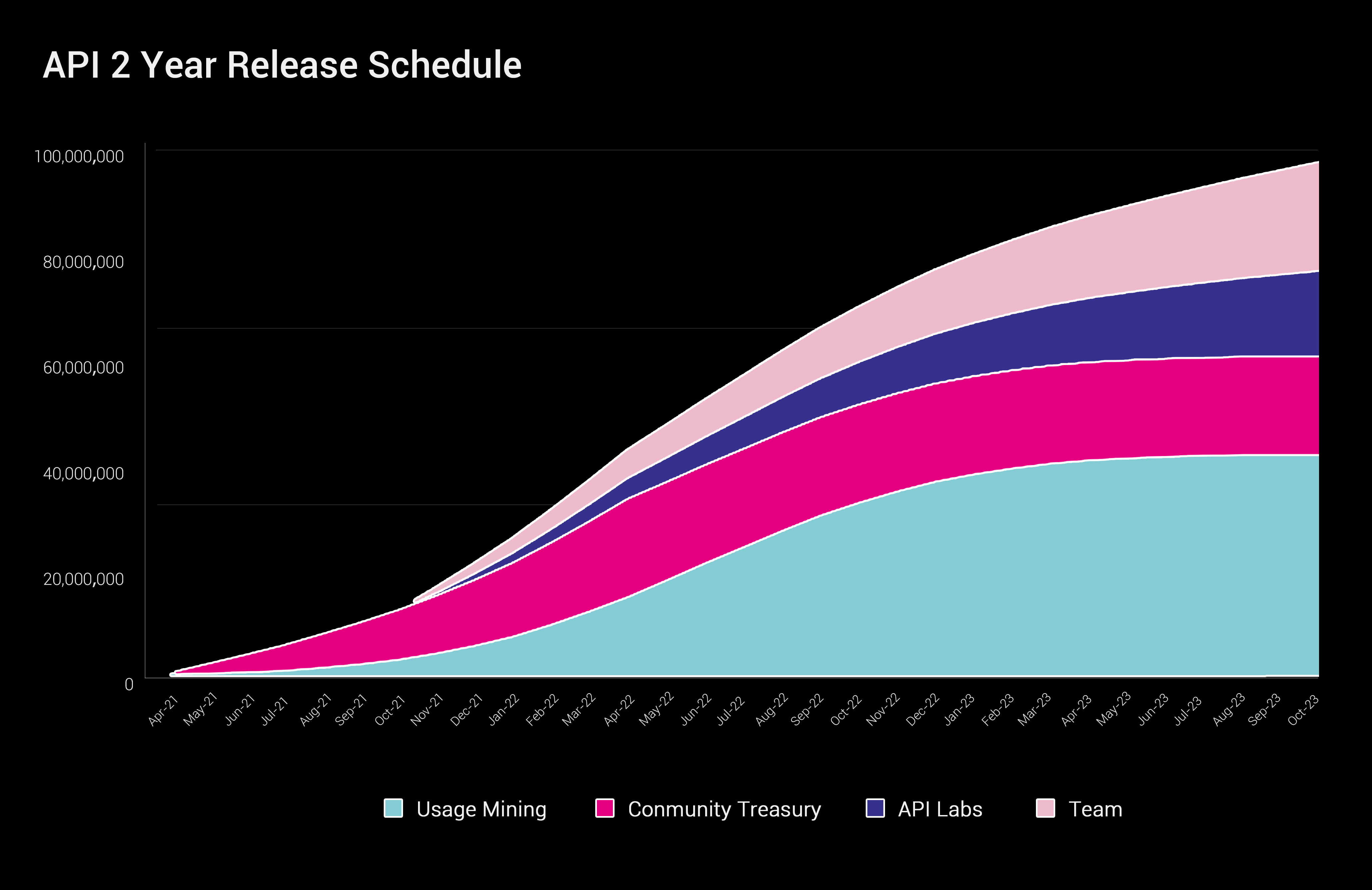 The API community token will be used for a myriad of functions. In summary, the uses of API include the following:

· Staking by APIS Nodes and APIS Gateways:  Nodes and gateway operators are required to stake a number of API tokens in order to establish their network presence. This will be subject to slashing, should the actor be proven to act maliciously;
‍
· Dispute resolution: This mechanism allows API holders to determine whether Nodes or Gateways acted maliciously (similar to Augur’s dispute resolution mechanism);
‍
· Staking by Optimistic or Zk-Rollup validators:  We anticipate this feature will be in place within a year, and;
‍
· Governance: Numerous ways to decide on new APIS contracts and upgrades through a voting system.
Primary responsibilities:
‍
Governance (voting)
‍
API holders vote on upgrades to the system. In return, holders may eventually vote on an in-protocol fee that is distributed to the APIS Treasury or to the API holders themselves (either directly or through a buy-back and burn). The debate of the size of in-protocol fees and the allocation of those fees (if enacted) has been debated by numerous prominent DeFi communities, such as Yearn, Uniswap, and others. Our governors may face the same debate eventually, or may simply never enact a protocol fee.
‍
Node / Gateway (staking as collateral)
‍
All Nodes and Gateways must stake at least the minimum amount required to be recognized by the network as an actor: 1,000 API tokens. These tokens are liable to be slashed should the Node or Gateway return a malicious request, as determined by the DRC. Nodes and Gateways will likely stake significantly more API tokens as higher stakes will signal more trust from end-user clients. This trust reaction will accumulate greater usage and consequently more revenue than competing Nodes or Gateways. It is up to the free market participants to determine what the optimal API stake is.
‍
Dispute Resolution (staking as collateral)
‍
The DRC requests that a challenger stake at least 5,000 API on a challenge, in order to mitigate spam. If there is a dispute, there must be a pool of at least 1.5 times the amount of API tokens staked by the challenger within 18.1 hours of the last challenge (5,000 Ethereum mainnet blocks). This process proceeds until resolved or if the APIS network forks, which will then allow users at large to decide which side won via which fork they decided to support.
‍
Rollup Validation (staking as collateral)
‍
The ORC requests that a validator stake at least 100,000 API. As validators have the ability to disproportionately affect Nodes and Gateways by manipulating the canonical history of the APIS protocol. If ORC validators are proven to have acted maliciously then their staked tokens will be decreased.
‍
Burn Fee
‍
The APIS Foundation will be running the first API Node and Gateway. For the first year, 100% of fee payments paid to the APIS teams’ Node and Gateway will be used to buy and burn API, although the Foundation’s Node and Gateway may decide to run freemium services in order to further the growth of the network.